New coffee from the Democratic Republic of Congo

Like African coffees? You’ll love our new single origin from the Democratic Republic of Congo. In a country that has been plagued by violence, the SOPACDI cooperative in the DRC is beating the odds with amazing coffee. Rich chocolate, sweet vanilla, brown spices

By Equal Exchange | Uncategorized | No Comments 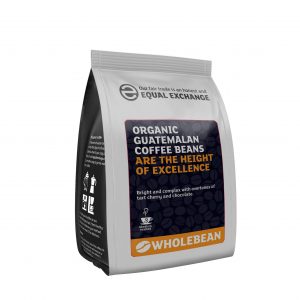 Our fabulous new organic coffee from the farmers of Manos Campesinas in Guatemala is on the shelves now. Bright and complex with overtones of tart cherry and chocolate and available as whole bean and ready ground.

At last our new Guatemalan coffee is hitting the shelves. Juicy, with overtones of tart cherry and dark chocolate we think you’ll love it. Look out for it in independent natural food stores and if you can’t find it drop us an email info@equalexchange.co.uk

Organic September is the perfect time to highlight the advantages of eating organic. The benefits to us, to the farmers that grow our food and to the planet are well documented. From avoiding artificial fertilisers to improving the quality of the soil around us, there are many reasons to choose organic.

A new report by Twin, in part funded by The Fairtrade Foundation and Equal Exchange, highlights as best practice the work we have done in producing our Grown by Women range of coffees. Fatima Ismael , General Manager of Soppexcca coffee co-operative in Nicaragua that provides coffee for Equal Exchange, was in London to help launch the Twin report Empowering Women Farmers in Agricultural Value Chains. The report analyses the results of interviews with 14 producer groups in Ghana, India, Malawi, Nicaragua, Peru and Rwanda across three commodities – coffee, cocoa and nuts.The findings show that despite women being active at all stages of agricultural production, in many cases providing the majority of the labour, women continue to face a glass ceiling when it comes to transporting crops to market and completing the sale. These tasks are almost universally done by men, who subsequently retain much of the control over household income.

Speaking at the launch event, Fatima said “Gender empowerment has been a main principle since Sopexcca was set up. During and after the war in Nicaragua there was a lot of violence against women both domestic and out of the home. The Co-operative saw that empowerment of women was a way of addressing this and helping to create a more peaceful society. Sopexcca offers credit to women and young people (both male and female) to buy their own land to grow coffee as this is a prerequisite of co-op membership. They also run health and education programmes with a strong emphasis on women. The male farmers do not feel threatened by this as they still sell all of their coffee to the co-op and they see the benefits in their homes and in their communities of the women gaining more status.”

The Fairtrade Foundation and Twin are calling on business to act on the recommendations in the report which are:

Real Reels – Steps in the world of Equal Exchange

A series of 2 min shorts to be released on YouTube, once each day over Fairtrade Fortnight (25th Feb to 10th March 2013).

A free ReelReals showcase with refreshments will be held at Summerhall, Edinburgh on Sun 10th March 4pm to 6pm.

RealReels is a series of films showing the work of Equal Exchange and some of our partners who bring you our delicious food and beverages. These films contain interviews with the farmers who grew our gorgeous Fairtrade and Organic coffee, nuts and honey. We watch what happens to the coffee when it arrives in the UK and how it makes the perfect cup of coffee. We then see what some of our customers think about Fairtrade, Equal Exchange and our products.

Many of the interviews are with women farmers who are part of our ‘Grown by Women’ initiative launched in 2011.

A recent report published by Oxfam, Save the Children and Action Aid amongst others, suggests that by focussing on supporting women farmers, women smallholders can be empowered to improve the communities they live and work in and achieve food security.

Although 85% of world farming is done by women, they often receive little in the way of financial gain or support due to existing gender inequality. Evidence shows that where women control household income the family’s health, nutrition and education is more likely to improve.

Grown by Women products are sourced exclusively from women in the co-operatives we work with. There is also a small additional premium paid which the women use in many different ways. We have heard first-hand the changes the women’s premium has made. It empowers the women to take control of their household finances, to finally be heard within the co-operative and they are using the premium to fund women’s projects in their communities.

In October 2012, Equal Exchange won a major UK Award for its continued dedication to go the extra mile for the farmers they work with in some of the poorest areas of the world. This includes pre-financing harvests, sourcing direct, encouraging organic agriculture, empowering women to join their co-operatives and packing at source.

Equal Exchange supplies over 60 products into the independent wholefood and fine food sectors, Fair Trade retailers and now has listings in The Co-operative, Sainsbury’s and Booths.

Supplying and campaigning for Fair Trade since 1979, based in Edinburgh. Equal Exchange Trading is a 100% Fair Trade co-operative distributing premium Organic and Fair Trade products to the natural and fine food sector, Fair Trade shops and increasingly now available in supermarkets like The Co-op, Sainsbury’s and Booths. We continue to expand our exports and also supply bulk ingredients for beauty and other products. Last year we supplied Fairtrade and Organic nuts for muesli at the Olympic Games village.

All Real Reels videos can be viewed on our youtube.

Canaan Fair Trade, a social entrepreneurship firm dedicated to artisan quality products that seeks to sustain the livelihoods of Palestinian producer communities, is pleased to announce that Canaan’s Nabali Olive Oil won a recommendation award at BioFach 2013 in Nuremberg, Germany.

The competition was organized by the olive oil bar of BioFach where tasting is done by connoisseurs and experts from the olive oil industry.

This, for Canaan and the Palestine Fair Trade Association, is a significant achievement especially that this olive oil is coming from small scaled farmers of Palestine, living in a conflict zone, and facing multiple challenges.

This award is for olive oil coming from small scaled farmers in cooperatives competing with single estate quality olive oil from Italy, Spain and around the world. This a real pride for our farmers, and a pride for Canaan to work with these farmers. – Nasser Abufarha, director of Canaan Fair Trade.

Canaan Fair Trade, a Palestinian company with a social mission, was founded in 2004 to empower thousands of small farmers caught in conflict to sustain their livelihood, build hope for a better future, and promote economic and cultural interaction towards a peaceful tomorrow. Canaan produces and distributes the organic, Fair trade and Extra Virgin olive oil and traditional foods cultivated by 1500 small farmer members and 200 women producers joined in the 49 cooperatives of the Palestine Fair Trade Association. Canaan products are sold in 15 countries around the world. Canaan Fair Trade is the first 3rd party certified fair trade olive oil in the world, and the largest exporter of olive oil from Palestine to Europe and North America. Canaan gives back to its farming community through programs that plant olive trees, extend micro-loans to women’s collectives, and award college scholarships to farmers children.

We are really excited to have received the Small Co-operative, Big Achiever Award at the Co-operative Awards in Manchester, held during Co-operatives United world festival and expo (29 Oct – 02 Nov 2012).

We are truly delighted to receive this award. We see this as recognition of 30 years of hard work by all those associated with Equal Exchange and by our producer partners, who consistently supply Equal Exchange with the most amazing products and are the real people behind the brand.

Why buy from women coffee farmers?

Whilst women’s empowerment does figure in the Fairtrade standards, we want to go further and challenge mainstream Fairtrade to show that the bar can be raised and women can have access to the same choices as men.

Smallholders, not estates, produce most of the world’s coffee and some of the best too! Yet despite women doing most of the work on the farm they often have little influence.
Evidence shows that where women control household income the family’s health, nutrition and education improves at a faster rate because less money is spent outside the household.

We see the development of traceable supplies of coffee coming from women farmers as a logical development of Fairtrade. We seek to improve the women’s status and capacity for independent action through these steps.
We are really excited by these first steps. Our Gumutindo coffee is now sourced entirely from women farmers! These are the first steps on a journey. We do not promise quick fixes but do promise to tell you what happens over the next few years.

In future we will source green coffee from women farmers for other parts of our range. Look out for those changes

Any cookies that may not be particularly necessary for the website to function and is used specifically to collect user personal data via analytics, ads, other embedded contents are termed as non-necessary cookies. It is mandatory to procure user consent prior to running these cookies on your website.