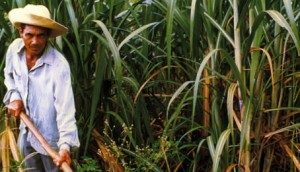 Cooperativa de Producción Agro-Industrial Manduvira Ltda (Manduvira Co-op) is located in the village of Arroyos y Esteros (Streams and Swamps), in the southwestern region of Paraguay. Founded in 1975 with just 39 members, the co-op now has about 1,000 members. Much of Manduvira’s growth has taken place since 2003, and it can be attributed to the fact that the members are doing things a bit differently. And it’s paid off.

Traditionally, sugarcane producers do not have control over the processing and marketing of their crops. Farmers have to sell their crops to a mill, which processes the cane and negotiates the sale of the sugar to national and international buyers. As a result, mills dictate prices to the farmers and often gain the largest profits from the sugar industry. In 2003, Manduvira organized, and 500 members went on strike until they could get better prices from the mill.

In 2005, following years of low prices, mistreatment, and declining quality from the mill they were using, Manduvira took another unprecedented step toward independence and began to assume more control over the production process by renting a local mill, Censi y Pirotta. This move was so successful that membership swelled and the co-op built its own mill, which is the first farmer-owned mill in Paraguay. The mill will allow Manduvira to be more competitive, build capacity, and provide additional value to its members.

“We are the only co-operative of small-scale farmers that have been able to rent their own factory,” said Andres Gonzalez, the general manager of Manduvira. “Every other of the 77 sugar factories are private companies and the owners are very influential, having lots of political and economic power. Power and ownership are inseparable, and there was no one who believed we would be able to rent our own place using just the support and hard work of the co-op members. And we’ve done it with strong management and sound administration, a strong co-operative and strong leadership, and now we are in the very good market position for both the organic and the Fair Trade markets.”

In addition to the benefits of processing and directly selling their crops, co-op members also benefit from Fair Trade premiums. Manduvira invests Fair Trade premiums in initiatives such as medical and dental services (available to the entire community, not just co-op members), uniforms and school supplies for farmers’ families, crop diversification, and technical support for members through agricultural training and a local radio station. The co-op also distributes 50 percent of Fair Trade premiums as cash payments to farmers to support them between harvests when incomes are at their lowest. These payments allow farmers to pay for household needs, such as food and educational costs.

The average farm size is 5 hectares (12 acres). Most of its members produce organic sugar cane, while the rest grow other crops such as sesame and a variety of fruits. Manduvira’s production is 100 percent organic. The burning of fields is not allowed, and farmers employ organic farming methods to maintain healthy, productive soil. Manduvira’s members use cut sugar cane leaves as ground cover to keep moisture in the soil and reduce weeds, weed by hand to eliminate the use of herbicides, and devote 7 percent of their land to either forest or other crops.

If you would like to learn more about this partner, please read their Partner Profile (PDF).