UNICAFEC is a small close-knit co-operative based in San Ignacio in the north of Peru, almost as far as the border with Ecuador. Out of their 408 members, 94 are women and we have been working with them since 2007.

Before they came together, the individual farmers in the area had no option but to take the money that was offered to them for their coffee by the countless middlemen operating in the area. So in 2001 the farmers came together with an idea. Starting with the integration of 106 farmers in the district of San Ignacio, they got together in order to sell their coffee directly to avoid middlemen and brokers, improve production volumes and to work on the quality of their coffee.

In the beginning they sold locally to cover their costs and after three years they managed to move to bigger premises. During that time they achieved organic and Fairtrade certification and began communicating with our partner, Twin Trading. Equal Exchange started purchasing organic and Fairtrade coffee from UNICAFEC in 2007 and we have become one of their oldest and most reliable buyers. 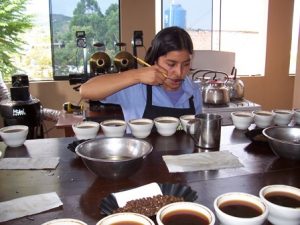 For the first few years they focused entirely on improving the health of their coffee plants and the quality of their coffee.  Any spare income was invested into an organic fertiliser programme, technical staff, agronomists to analyse the soil and conduct farmer training and better equipment on the farms. They are proud to now produce coffee that consistently scores well on SCAA’s classification system (Specialty Coffee Association of America), and they know that without working together they would not have reached this. 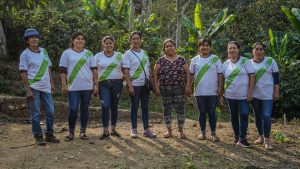 The cooperative has invested the premiums from purchases in building an office, cupping lab, fertilizer warehouse and drying machine fuelled sustainably by coffee husks. The drying machine enables UNICAFEC to consistently control moisture levels to achieve export standards during the humid drying season. This is increasingly important due to heavier and more frequent rainfall as a result of climate change. They have also trained team of cuppers, which provides feedback to improve flavour and quality.

Premiums from the sale of all coffee ‘Grown by Women’ have contributed to the financing of polytunnels for coffee drying. Previously, coffee was dried on the ground. When it rained the cherries could become mouldy. The polytunnels enable the coffee to be dried whatever the weather and have created a major improvement in quality.